Reel Stories is a nonprofit youth media organization that combats the significant gender imbalance in film production. We teach youth that with the right tools and training, they hold the key to a revolution in the media industry. Their dreams are within reach!

America has a serious media problem: 96% of feature films are directed by men. So it’s no surprise that for every 1 female speaking role in film, there are 2.18 male speaking parts. When we factor in race, the statistics are even more shocking: nearly half of the top-grossing movies in 2017 had zero Black female speaking characters, and two-thirds had zero representation of Asian women and Latinas.*

The only way these numbers are ever going to change is if more women step behind the camera and tell their own stories. Reel Stories creates a path for young women to make their own content and enter media careers. We empower our participants with the skills, experience, and connections to succeed in the industry and improve female representation behind and on screen.

of Films had Balanced Casts

Ratio of Males to Females

Film and television are multi-billion dollar industries, making it seem secretive and exclusive. But these industries are going through a process of great transformation right now. Anyone can tell their story and distribute it to the world via online and social media platforms like Youtube, Vimeo, and TikTok, yet women are still famously underrepresented behind the scenes and on screen.

The impact of this is felt in every aspect of our society, both reflecting and shaping views of women about themselves and others. A lack of women leading mainstream media’s storytelling undoubtedly contributes to the negative way in which young girls see themselves: one study indicates 80% of young women reported that images of women in television and the movies make them feel insecure. 2 Another study reveals 69% of 5th – 12th graders report that the media influences their idea of a perfect body shape.

Reel Stories is training the next generation of female filmmakers. We provide educational opportunities where girls and young women learn to create their own media content, giving them the tools to work behind the scenes. Through camps, workshops, screenings, clubs, and mentorship, Reel Stories creates a pipeline of young women with the skills they need to enter the film and media industry, and the confidence they need to succeed. Importantly, these young women are a diverse group; 50% of our participants identify as people of color, and 40% receive financial aid. Our programs can give young women the boost from amateur to professional that can propel them into their careers in media and beyond.

When women and girls are better represented behind the scenes in the media, they will be better reflected on the screen.

In 2013, Executive Director Esther Pearl founded Reel Stories, the only female owned & run non-profit film program for women in the country led by professionals. Throughout her many years working in the film industry, Esther grew hyper aware of the severe lack of diversity, often finding herself the only woman in the room. Esther created Reel Stories seven years ago to build equity in the media industry, paving the way for women & girls to make their own content and enter media careers. Reel Stories empowers our participants with the skills, experience, and connections to succeed.

As Reel Stories’ popularity and partnerships grew, what was initially a one-week summer program expanded into an organization with year-round programming, weekend workshops, and various events, including film screenings and fundraisers. Reel Stories transitioned from “Camp Reel Stories” to “Reel Stories” to emphasize that we aren’t simply a camp, but an organization that provides opportunities for women year-round to succeed in not only the film & media industry, but in any field they choose to pursue. Reel Stories doesn’t just teach filmmaking- we teach women to create their own media, view current media critically & thoughtfully, and aspire to leadership in their field.

The young filmmakers we work with are brilliant and courageous. They come from diverse backgrounds and hold strong opinions. It’s an honor that they choose to spend their time with us and as much as we are training them to be content creators they are training us to see the world through their eyes.

In January of 2021, Reel Stories officially merged with Bay Area Video Coalition (BAVC), a community hub for media makers in the Bay Area and across the country, providing access to media making training, technology, and mentorship, and platforms for diverse and engaged makers and producers to collaborate, build their careers, and to support social change. Reel Stories continues to provide our programs & events, including our flagship summer filmmaking programs, but now our devoted community will also have access to the incredible resources BAVC has to offer! 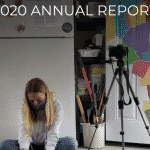 Find Out More About BAVC!

Reel Stories is made possible through the generous support of foundations, community partners, and donors.

We believe that when women and non-binary people are better represented behind the scenes in media, they will be better reflected on screen. Your gift will will help us move towards gender parity in the media by creating spaces for young women and non-binary youth to learn the technical skills of filmmaking, view media critically and thoughtfully, and create their own media content.