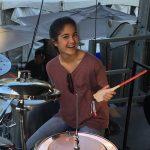 I’ve gone to Camp Reel Stories three times so far and plan on going for a fourth time this summer. It’s become a tradition of sorts to attend camp, make a film, and watch it spread throughout the country to various film festivals and onto people’s screens, whether those are found on their phones, on their computers, or in movie theaters. I cannot confidently say that I will go into the film industry when I grow older, but I can say that I have found a sense of community through the camp and gained inspiration from strong women, who prove everyday that they have what it takes to compete with men in a male dominated industry.

Ten, twenty years ago, not many girls could have said they have such a large support system or find such inspiration from the women around them. Today, while we have strong female role models, when one compares the female to male ratio in the film, tech, sales, finance, culinary, mathematical, and political industry- to name a few, we females still fall far behind men. To not just know one strong female but a whole community of powerful women, whose shared goal is to change an industry, is incredibly important to me. To have a community and a group that helps me grow as a woman and as a filmmaker, to have a support system, and to feel like I’m a part of something innovative, something that is making an impact that grows every year, is something I’m very grateful for because change is important and change has been slowly increasing for years. I am confident that with help from Camp Reel Stories and other organizations promoting change and the support of minorities, I will see an industry that isn’t dominated by a single gender or ethnic group in my lifetime.

Camp Reel Stories is a film camp, one that has opened my eyes to new possibilities for my future, provided me a community, and opened doors for me into the film industry because Camp Reel Stories doesn’t stay just a summer camp if one doesn’t want it to. It is something that I, and other people, can get involved in during the year and make a difference in. The women we meet don’t just speak at Advanced Camp or volunteer at Boot Camp, they are more than willing to help girls meet new people and make new connections if film is what they want to pursue or even just look into. It is so much more than just a week or two week long summer camp, and that is why I love being a part of it.

Camp Reel Stories is where I can make a difference, find a community, and discover a future I had never considered before, and that is why I will be returning for my fourth year.

What’s it like to volunteer at Camp Reel Stories?