My Tour Of Pixar

As a student board member at Reel Stories, I had the amazing opportunity to experience a tour of Pixar Animation Studios in Emeryville, California. Living only fifteen minutes away from Pixar Studios, I have met dozens of people who either work there or have family or friends who work there, some holding high-level positions in the production of these films, others even taking on the roles of characters in these loveable animations. Although I drive only blocks away from Pixar several times a week, I have never had the opportunity to enter its gates and venture into the world where the stories of my childhood first came to life. Last week, however, I, along with 5 other board members, was given a tour by Pam Darrow, a member of the Reel Stories Board of Directors and an employee at Pixar. Today, she works as a project manager and is in her nineteenth year at the studios. We were incredibly thankful that she took time out of her busy day to show us around the campus.

Before venturing into the buildings, we traveled along the walkways, taking photos in front of the famous Pixar lamp and ball. The outdoor campus was beautiful, vibrant green trees looming on both sides of the pavement. It seemed more like a college campus than a work-space. Near one building was a grassy amphitheater, and near another was a soccer field. Darrow told us about the entertaining soccer matches that go on between the employees. Across the way was their very own swimming pool and basketball court.

The first building we explored, “The Steve Jobs Building”, was named after Pixar’s former chairman and shareholder who is also known for his influence on the work-space’s architecture. The interior was dazzling, high-ceilinged, and modern, employees conversing in the cafes as they scattered to their meetings. In the downstairs area, Darrow took us through meeting rooms including a small, but cozy space with velvet sofas and photographs of baseball players on the walls. Everywhere throughout the building, meetings were taking place. Statues and murals of characters decorated the halls, including Bing Bong from Inside Out and Merida from Brave. 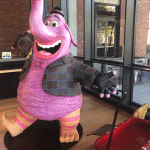 Down the way from the cafes and gift shops was a red hallway leading to a small back room. Along the walls were dozens of signatures and notes written in sharpie by vocal actors who had worked in the sound studio, including that of Anthony Gonzalez who played Miguel in Coco and Tim Allen who played Buzz Lightyear in Toy Story. We snapped photos of the signatures of our favorite actors and actresses, delighted that we could touch the same walls as they did. The small space was the sound room, isolated and snug, two rooms separated by a door. A sound mixer who was in the room as we walked in explained the different parts of the sound studio. The first room was for sound mixing with computers and recording systems set up. Behind the room was an unusual set up: two glass doors with nothing in between them. They stood crookedly, and behind the second door were monitors and computers. The mixer opened up the second door and the silent room suddenly filled with humming noises. The thick glass doors were installed to prevent any sound from interfering with recording. In the second room, there were two televisions on the walls, a table with headphones, and a stand set up with two microphones. The two microphones, he explained, are used for different speaking volumes and tones. If an actor speaks quietly or at a normal volume, the closer microphone’s audio is used, but when the actor yells, the further microphone’s audio is used.

Upstairs in the Steve Jobs Building was a Toy Story 4 art presentation. Computer images and drawings created by Pixar employees lined the walls, including storyboards that gave us an idea of what a scene in the upcoming film would be like. There were clay structures to give a 3D perspective of various characters. While exploring this space, we listened to Pam Darrow explain the general process of the making of films at Pixar from pre-production to distribution. On average, she told us, a Pixar film takes four years to make. It was fascinating to imagine that a film like Toy Story 4 that seems so new to the public has been in progress since around 2015. 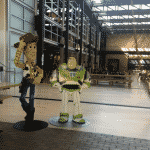 The final experience we had at Pixar was in a theater in the second Pixar building. Darrow explained that new employees are introduced to the company by viewing a short film in the same theater. These short films created by Pixar employees are called Sparkshorts. The Sparkshort program gives creative opportunities to Pixar employees no matter their position in the company, allowing them to spend several months directing their own team. We watched a Sparkshort directed by Bobby Rubio, a story artist, called Float. The main character, a young boy who can fly unlike the other kids, was inspired by Rubio’s autistic son.

Being able to get a glimpse into the working lives of these animators, producers, and directors was unlike any other, particularly because Pixar is such a unique and influential production company. Having the opportunity to explore this dream world of film and animation was incredible and certainly unforgettable.